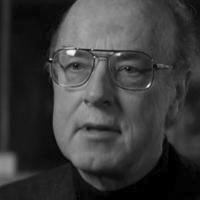 Since 1979 has been associated with American Zoetrope as a film executive or producer. As Zoetrope’s director of special projects he developed and supervised the 1981-82 worldwide revival of Abel Gance’s 1927 masterpiece Napoleon, as well as the 1980 presentation across America of Hans-Jürgen Syberberg’s seven-hour long movie, Hitler ein Film aus Deutschland. Luddy coordinated Zoetrope’s sponsorship of Godfrey Reggio’s Koyaanisqatsi (1983), and two collaborations with Jean-Luc Godard, Sauve qui peut (la vie) (1980) and Passion (1982). He was also instrumental in Zoetrope’s support for Akira Kurosawa’s Kagemusha (1980). Other films in his career as a producer worth mentioning are: Mishima (Paul Schrader, 1985), Tough Guys Don’t Dance (Norman Mailer, 1987), Barfly (Barbet Schroeder, 1987), King Lear (Jean-Luc Godard, 1987), Powaqqatsi (Godfrey Reggio, 1988), Manifesto (Dusan Makavejev, 1988), Wait Until Spring, Bandini (Dominique Deruddere, 1990), Wind (Carroll Ballard, 1992), The Secret Garden (Agnieszka Holland, 1993) and My Family (Gregory Nava, 1995). In 1974, Luddy co-founded the Telluride Film Festival. He served as a member of the New York Film Festival's selection committee for three years and he was also on the board of the San Francisco Film Festival for many years. He has been Jury of the Moscow and Berlin Film Festivals in 1979 and 1987 respectively, and in 1983 he was the appointed American Jury Member at the Cannes Film Festival, under the chairmanship of Louis Malle.