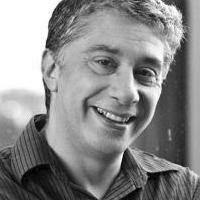 A journalist, filmmaker and television host, Patrice Carré was born in Paris in 1958. During the 1990’s he began working in the film industry until he became assistant director. For seven years he has presided the Short Film Cooperative, now converted to the Maison du Film Court. He is responsible for the short film section of the weekly magazine Le Film Français, and he writes, since 1998, for the special editions about the Cannes Film Festival, the César Awards and the Film Production Guide in France. For six years he has been editor and presenter of the weekly broadcast Cinécourts, dedicated to worldwide short films. He has also participated at the plenary commission of the National Film Center for the financial support of short film. Since 2004 he is part of the selection committee of the Cannes Film Festival’s Critics’ Week. His first short film, La Femme qui a vu l’ours (2003) has participated at various festivals (Montpellier, Villeurbane, Pantin, Grenoble, Trouville), was pre-selected for the 2005 edition of the César Awards, and nominated for the Lutins Short Film Awards. Carré directed the play Western Solo, which was presented at the Avignon Festival. He is currently writing the script of his first film.