Song of Mexico … A Distortion of Reality

At the beginning of 1946, a time when that “virile, resplendent star of national cinema” David Silva advertised Corona Extra and Negra Modelo Beers, as well as products like “666 Cream”, “Rialto Cigars”, “Penetro Cough Drops” or “Maracas…the best rum for cuba libres and cocktails”, the now defunct weekly El Redondel published a piece on its cinema page, signed by Alfonso de Icaza, about the premiere of Canción de México (Song of México, 1945), directed by James Anthony Fitzpatrick.

“Here we have a nice film, made with real good will. The plot is simple… a couple quarrelling in the United States … she comes to Mexico to live with a friend; he follows her, and both travel through Cuernavaca, Taxco and Acapulco… The beauty of our landscapes and the social life of Mexico shine more in this Hollywood film than in productions that come from local studios … The ‘gringos’ who made it have truly shown their love for Mexico. Thanks!” 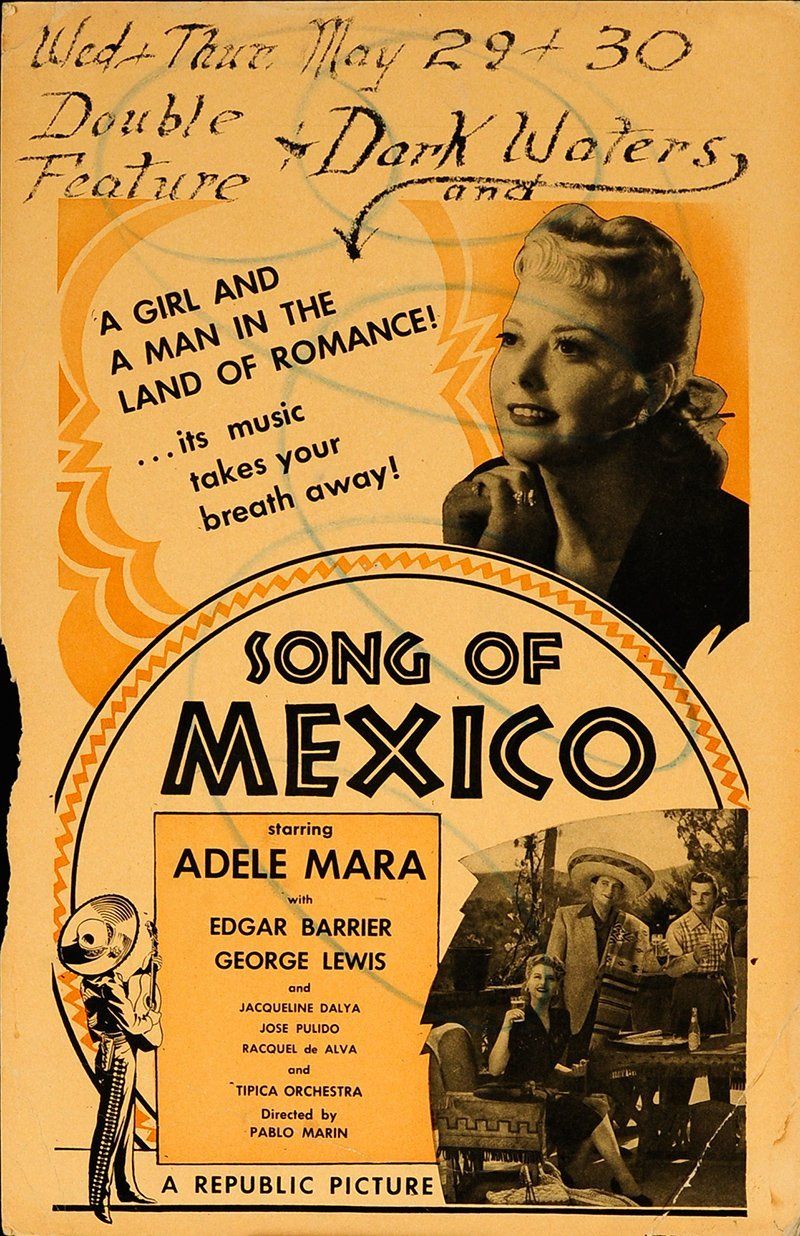 In contrast and a world away from the de Icaza’s veneration, Armando Morán (critic for El Cine Gráfico who wrote under the pseudonym ‘Anotador’), published the following: “If Hollywood producers intend to make films like Song of Mexico in Mexico, honestly nothing good will come of it. They have made what we colloquially call a ´churro´, in spite of James Fitzpatrick, that famous globetrotter who forgot that Mexico even existed until the War… At least we can thank Fitzpatrick for leaving the authentic regional costumes alone…”

Song of Mexico – produced by the legendary company Republic, which specialized in adventure serials – was one of few fiction films directed by James Anthony Fitzpatrick (1894-1980), a native of Conneticut who made so-called ‘tourist films’ or travel diaries, in which he focused mainly on the architecture and landscapes of different countries. During his travels he made more than 300 medium-length films, which were known as Fitzpatrick’s “Traveltalks”, as part of which he developed his now famous series of “Song of” films. In Mexico he made short films including: Vislumbres de México (1940), Ciudad de México Moderno (1942), Automovilismo en México (1943), Mérida y Campeche (1945) and Visitando Veracruz (1946).

Song of Mexico was written by Sidney Fields and Edmundo Santos, well-known as voices in the national dubbing of Walt Disney films. The Mexican Jorge Stahl and the Hungarian John Alton (who made B movies), shared the photography credit, while Jesus Bracho was responsible for the set design. Alongside the American actors Adele Mara, Edgar Barrier and Jacqueline Dalya, starred the Mexicans José Pulido, Raquel Alba and Carmen Molina. There was even a brief appearance by German Valdés “Tin Tan” and his inseparable sidekick Marcelo Chávez in the cabaret “El Patio”.

Song of Mexico, a musical comedy with minimal plot, adorned with the Mexican landscapes of Acapulco, Cuernavaca, Taxco, Teotihuacán and a vibrant Mexico City, as well as the songs of Manuel Esperón, Alfred Núñez de Borbón, Pedro Galindo, Ernesto Lecuona and Pablo Marín, showed the impact of Germán Valdés, with his pacuhco dress and musical style. The film would offer a precursor to films like Happy Holidays (1949, Ted Stauffer), which helped to push the transformation of Acapulco into a paradise resort, with lush vegetation, golden sands, virgin beaches, and modern hotels and restaurants that towered over the coastline that separated poverty from opulence.

It is also important to mention that Walt Disney, Francis Alstock, Louis B. Mayer and James A. Fitzpatrick himself had been decorated by the Mexican government a short time before, in 1943: Manuel Ávila Camacho’s government awarded the prestigious “Aztec Eagle” to filmmakers that bolstered good relations between Mexico and the United States. The award offered recognition to those who made “documentary films from Mexico, cartoons and works destined for the North American public, in which the authentic reality of Mexico is not simply reflected, but rather is presented with a sense of brotherhood and affection”, according to the El Universal newspaper on August 15, 1943.

That is to say that Ávila Camacho’s government was aware of the extreme poverty of several rural regions of Mexico, but decided to celebrate the fictions made by a group of foreign filmmakers: paternalistic, colonialist and folkloric visions of a nation that were wrapped up in the colour, joy, submission and servility of the third world. The prize was given in the company of the President and the then Secretary of Foreign Relations, Ezequiel Padilla, which was why stars like Hedy Lamarr, Joan Crawford, Judy Garland, Marsha Hunt, Katherine Grayson and Lana Turner (later famous for their sexual scandals in Acapulco) came to the region, which became a paradise for foreign tourists, far from the poverty that existed in the rest of the state of Guerrero.

Evita Muñoz “Chachita”: The Little Girl Who Grew Up