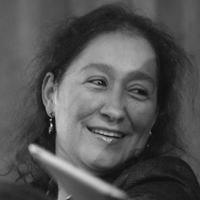 Marina Stavenhagen was born in Mexico City, where she studied Communication Sciences at the Universidad Autónoma Metropolitana and screenwriting at the Centro de Capacitación Cinematográfica (CCC). A promoter of audiovisual culture, she has been Promotion Director of the IMCINE (Mexican Film Institute) and director of the first three editions of the International Film Festival of Film Schools, as well as general coordinator of the International Video and Electronic Arts Festival (Vidarte) in 1999 and of the first six editions of the Acapulco French-Mexican Film Festival. A juror at numerous film, short film, and video contests and festivals, she is a member of the board of directors of the Mexico City Children’s Film Festival and Vice-President of Women in Film and Television (Mexico). The French government awarded Stavenhagen, in 2004, the Order of Arts and Letters. She has participated in the Sundance Institute’s Screenwriters’ Laboratory in Mexico, sponsored by the Toscano Foundation. Her vast filmography includes En medio de la nada (Hugo Rodríguez, 1993) and De la calle (Gerardo Tort, 2001). She presently coordinates the Evaluation and Project Development Workshop of Televisa Film and is writing screenplays for several film projects.