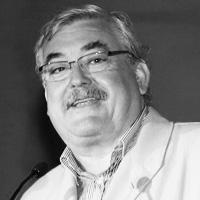 Born 53 years ago in Huesca, Spain, José María Escriche has worked tirelessly in the field of film promotion. After his university studies, he was elected President, in 1973, of the Pena Zoti Cultural Association, in which he founded the International Short Film Competition, a pioneering contest in character and orientation. Five years later he became president of the International Short Film Competition of the city of Huesca. The enthusiastic response from audiences and filmmakers led him to create the Huesca Film Festival Foundation. Between 1983 and 1986 he was Town Councillor of Huesca, successively holding the offices of Deputy, Mayor, and President of the Education, Culture, Sports and Celebrations Commission. At the same time, he was advisor to several associations, trusts and cultural organizations, both Spanish and foreign. He has also worked on commissions dedicated to evaluating film projects in Spain. Escriche has been a juror in a variety of film competitions and is a founding member of the European Coordination of Film Festivals sponsored by the European Union— which encompasses more than 200 European festivals. Presently, he is Technical Cultural Advisor for the Huesca Town Council and Director of the Huesca International Film Festival.