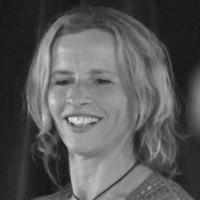 A promoter of Latin-American cinema in Europe, Irma Dulmers was born in Arnhem, Holland in 1964. She studied Theatre and Film Sciences at Utrecht University and completed her education at the International Television and Film School in San Antonio de los Baños, Cuba, where she developed a thesis on LatinAmerican film. Since 1984 she has worked for several film festivals in her native country, and since 1989 she is the programmer of Latin-American short films at the Rotterdam International Film Festival (IFFR). From 1991 to 1999 she directed the Latin-American Film and Literature Festival in Rotterdam, featuring a variety of screenings as well as the participation of distinguished Spanishlanguage authors. She has produced several documentaries and imparted conferences either on Latin-American cinema in general or on a particular film, tendency or filmmaker. She currently selects Latin-American features at the IFFR, which is why she is frequently invited (sometimes as a jury member) to the most relevant film festivals in Latin America. She lives in Amsterdam.