FRENTE AL SILENCIO, the Documentary That Stole Tears at the 20th Edition of FICM

The screening of Frente al Silencio (2022, dir. Emilio Ruiz Barrachina), a documentary that was filmed in Spain during the COVID-19 pandemic, was held at the University Cultural Center. The presentation was attended by the producer of the documentary Javier Espada, and the Mexican writer and poet Eduardo Vázquez Martín.

Frente al Silencio is a documentary that has to do with pain as a creative process. It tells the story of Fuensanta “La Moneta”, a contemporary flamenco choreographer and dancer, who after reading the collection of poems La cabellera de la Shoá by Félix Grande, decides to integrate a retrospective look at the Auschwitz concentration camps into her show. This process will make her and her team discover her fears, prejudices, and pain.

At the end of the screening, the audience shared their comments and impressions in a very emotional way: “We see how historical memory is materialized through pain. Cristina Rivera Garza talks about pain as that which can unite us, that makes us so vulnerable, that eventually makes us get to know each other better, and that we get to know each other from the inside out. A beautiful duality, between sadness and beauty. If I had one word to describe it, it would be magic." 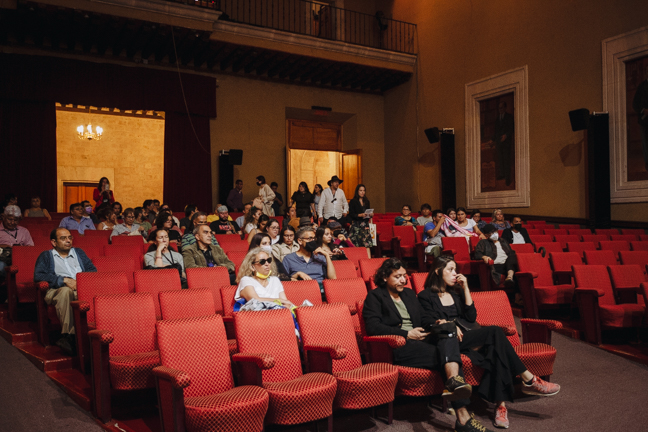 In 2021, at the 19th edition of FICM, the director, producer and screenwriter Javier Espada presented his documentary Buñuel, un cineasta surrealista (2021).

The screening of Frente al Silencio was made possible thanks to the support of the program of the Spanish Cultural Action (AC/E) for the Internationalization of Spanish Culture (PICE), in its Mobility modality.